I discovered yesterday evening that Tim had never seen the video of a young girl’s new flying fairy toy flying directly into the fireplace fire at first launch:

Henry was in the room for this discussion and consequent viewing and naturally wanted to watch as well.

It did not go well.

It turns out, the very important scene in which the fire is put out and the toy rescued was cut.

Then I used the occasion for a fire safety lesson that wasn’t listened to.

“But I need to see them put the fire out.”

What proceeded were two videos, one of two men putting out a small fire and another of the same flying fairy toy flying freely and unburned.

So if Henry asks, THE FAIRY IS FINE.

Happy 3rd birthday, Henry. I love you and I like you.

Growing up, my gymnastics team marched in the Strawberry Festival parade every June, in which we did sweet tricks in our red body suits and white shorts that our moms bought at Jamesway and tried to make sure we didn’t land in horse crap. This, and sunburns and burning my hands on hot tumbling mats, are my childhood memories of the Strawberry Festival.

This year was Henry’s first Strawberry Festival. He did not wear a red body suit or white shorts.

And watched the parade: 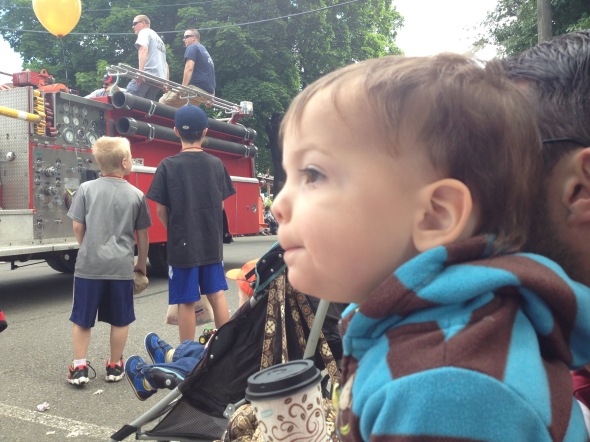 There were fire trucks and white people and fried food.

And the big kids helped the little kids get the candy out of the street before they got run over by a fire truck or a white person eating fried food.

Then we dropped Henry off at the church tent and went and tasted lots of wine in another tent. 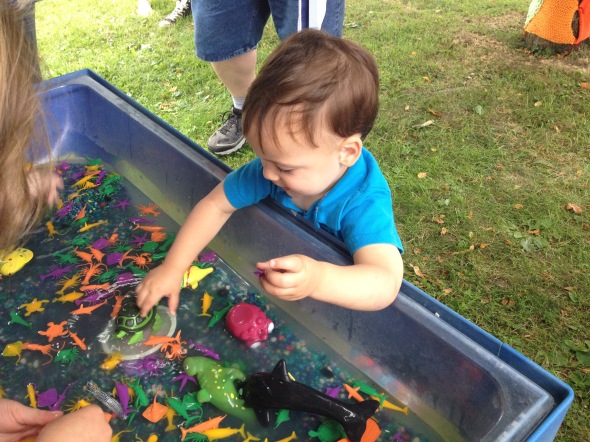 (He was with his Gangy, and it was a Methodist church, so, totally fine.)

Then we stopped at my aunt’s house to use the bathroom, but she was not home, so Tim and I may have peed in her backyard. Successful day all around.

Yup. I predated this to look like I posted it in June 2014. Suckers.

First, I must brag about our Father’s Day gift. Henry and I MADE Tim a book. Here it is: 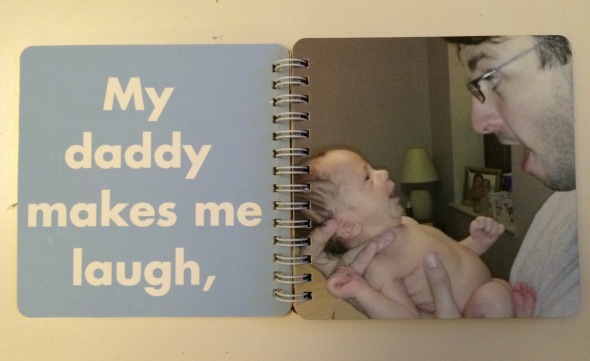 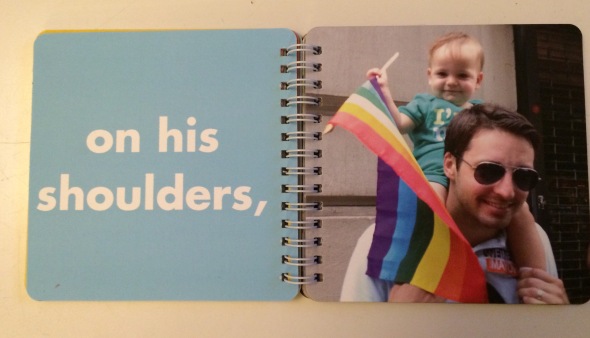 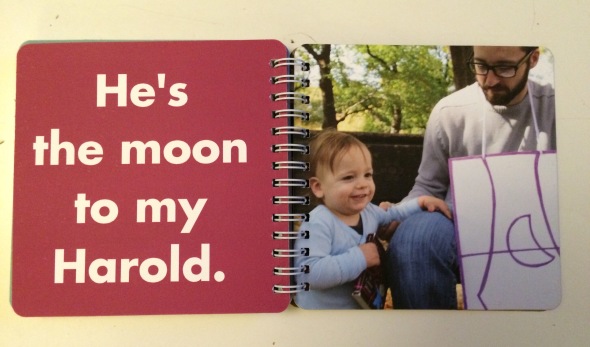 We made Tim breakfast: 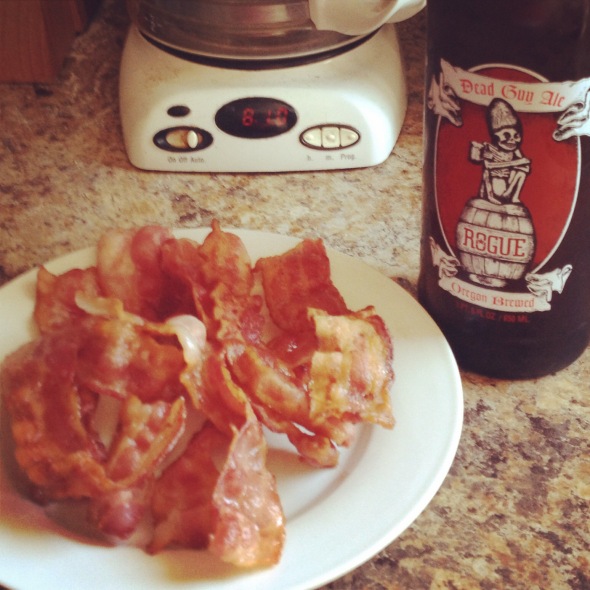 And went on our now-tradition-because-we-did-it-once bike ride in Central Park:

Then we all went home and took a nap.

I have not updated this blog regularly. I am going to work on “filling in” the missed time and be better at updating. I know a lot of people love Henry. We love you too.

This past weekend we ventured out to Fire Island Pines and stayed with some friends who have a summer house there. After Henry’s friend Penny’s birthday party in Queens, we took a bus to a subway to a Long Island Railroad train to a ferry 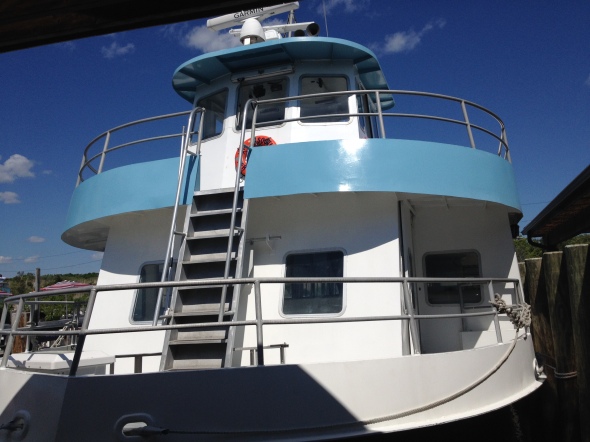 to a waiting, tipsy Omar on the Fire Island Pines Marina dock (no pictures of that).

Tranport tally: bus, subway, train, boat. It was like it was HENRY’s birthday. And Mommy and Daddy got to have a beer on the boat because of course the Fire Island Pines Ferry dock has a bar. Fire Island starts at the ferry. With this view: 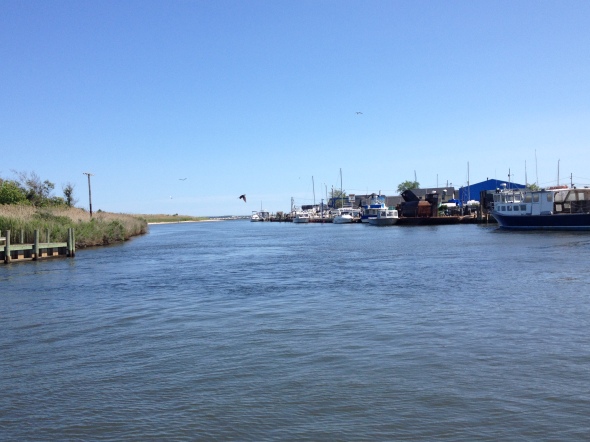 Then it was a quick stop at the one grocery store where we were the weirdos not wearing bathing suits and on to the lovely house where our friends very, very graciously let us stay, and let Henry wear their shoes. He loved the shoes.

Then, it was beach time.

With all the sand around Henry was not interested in the ocean.

While the boys went to tea dance, Tim and I watched the sunset on the ocean and drank white wine while Henry tried not to fall asleep on Tim’s lap. Then it was back to the house, where the kiddo slept and Tim and I were regaled with Fire Island Pines stories into the night.

Because two-year-olds get up with the sun and adult friends on the weekend don’t, we were out of the house very early and took a walk. Tim described Fire Island as a mix of camp and the beach. No cars are allowed on Fire Island (thus the ferry) except for an emergency vehicle, so all of the “roads” are wood walkways. There’s really no reason to not wear your bathing suit at all times and shoes at no times. 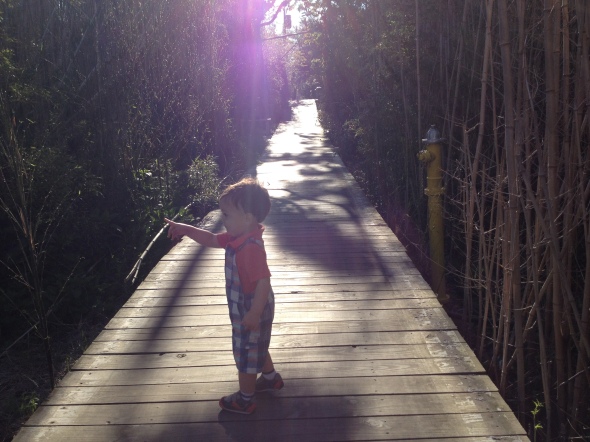 Then it was back to the ferry, then the train, then the subway, none on which Henry fell asleep. Even though it was only for 24 hours, it felt longer, and the trip, even with a toddler, was relaxing.

Now, here is your reward for making it to the end of the post.

Last night I introduced Henry to The Muppets Take Manhattan. He spent the entire movie shrugging his shoulders and asking, “What Piggy doin’?” He totally got it.

For his birthday we threw Henry a birthday party in Central Park. Lots of friends and family showed up, and the rain held off until the party was over. It was a good day.

I brought the camera, took what I thought was a ton of pictures (it was not) but luckily enough to share. No pictures this year of the table, but I did take a picture (after we got home) of the sign we hung on the table:

If you can’t tell what it is, too bad, Henry knew and was very excited. (Sorry, MTA, for going off-brand; I can’t freehand helvetica.)

Henry spent the day trying to escape from the confines of a very large, open field, 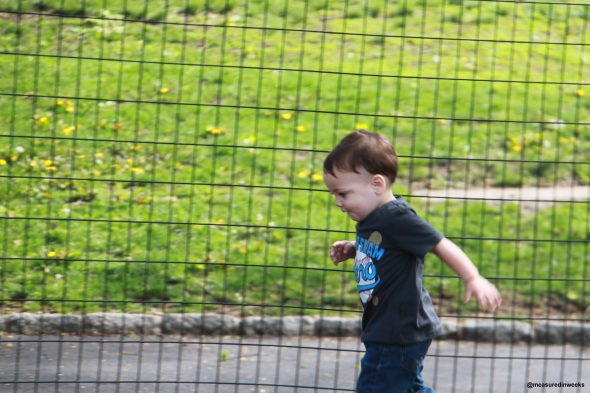 figuring out his new bubble shooter,

ditching his party for the playground, 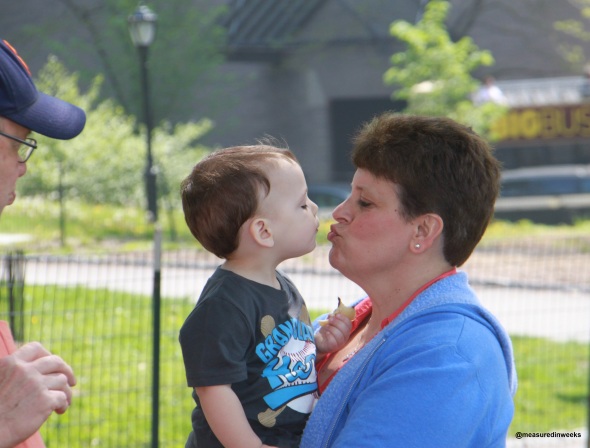 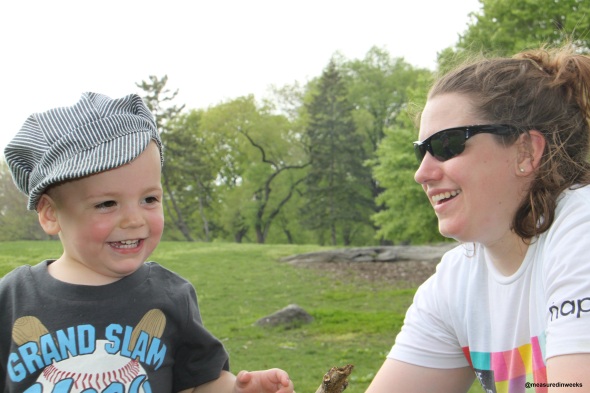 Happy birthday, my joyful, determined, funny two-year-old. I love being your mom.

I’m on a plane waiting to take off on my first trip away from Henry. I’ll be gone six days. Wish me luck. (Please.) (Thanks.)

Henry turned 22 months this month. We are closer to 2 than to 1 now. In fact, I’ve just started calling him a 2-year-old. He looks like it. He acts like it.

Looking back at my 18 months post he is so different. There’s now very little overlap in his “stats.” It’s equally bittersweet and fascinating.

Favorite books: Anything with a train, construction vehicle, or emergency vehicle in it. Any and all books about anything. But particularly lately Where Is the Green Sheep, Good Night Central Park, and Red Wagon.

Favorite activities: Reading, vacuuming, brunch, playing with his train and truck (always together), visiting family, dancing, singing, making a mess to clean up (cleaning up is the goal), putting on lotion, watching “Bigger Bigger,” running to the window every time a vehicle with a siren drives by … and we live near a hospital. AND PLAYGROUNDS.

Words: I’m going to stop listing the words. Every day his school report checks off “talkative.” Though I will announce that he says “excavator.” We were just as surprised as you are.

How Henry currently makes us laugh: Well, “excavator.” Singing himself to sleep. Figuring everything out. Knowing what he wants and doesn’t want. Closing the toilet lid and putting the safety lock on if we forget to do so when he goes in for a bath. Pointing out his penis every time it’s exposed. Calling Uncle Neil’s song “Bigger Bigger,” singing along to “Bigger Bigger” and getting really upset when we don’t play it eight times in a row or every five minutes. Always being excited to hear an “ambeeants” [ambulance] or see a subway train. The feelings he feels. How well he repeats words. Wearing my boots and successfully walking in them. Telling us he has poopy in his diaper and being right sometimes.

And now for the pictures: 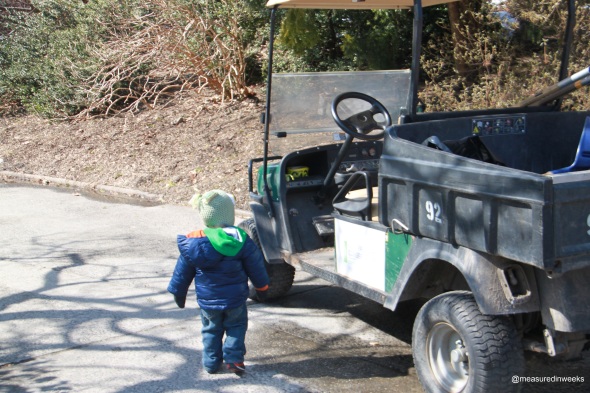 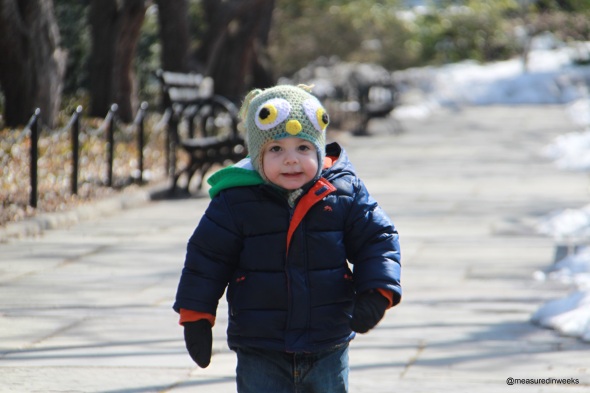 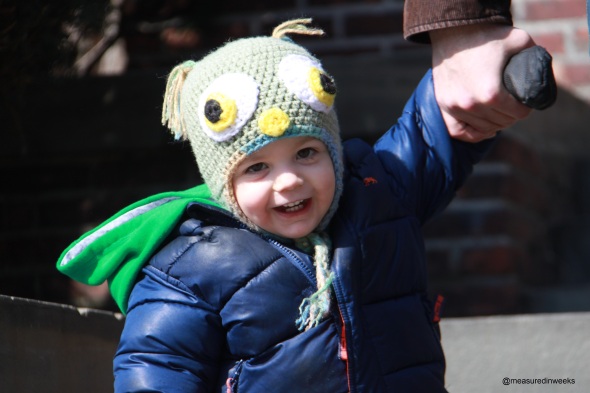